Brexit: what next? - Why Jeremy Corbyn might be our best hope

The petition calling for a second referendum now has over 3.6 million votes. Some of these have been found to be bogus - an estimated 77,000 signatories are not UK citizens - but the number remains impressive.

I signed the petition, but it was and should remain a symbolic gesture of protest. I hope that Parliament doesn't act upon it, whatever motley crew now constitutes Parliament as things fall apart. This country is a tinderbox ready to explode. Many of those who voted for Brexit voted in anger. Some might regret that vote, but some might become even angrier and more determined if what they perceive as a self-serving political elite overrides their democratic choice.

The fact that we had a referendum at all constitutes a catastrophic failure of leadership by David Cameron - a man who gambled the future of his country on party political power struggles and lost. Even if the remain campaign had won, he should still have been made to resign. He should never have called a referendum on such a monumental issue when what we needed was sound leadership by the elected representatives of the British people, not populist tyranny. 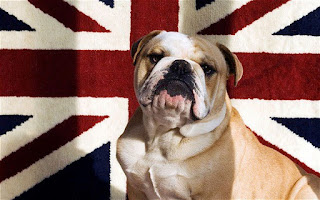 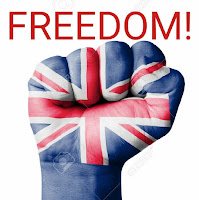 (I downloaded these two images from the Twitter feeds of a Brexiteer.)


There are many theories as to who voted for Brexit and why. There are the Bulldog Brexiteers - nationalistic, xenophobic, Islamophobic, racist and triumphant. They are nostalgic for the days of empire and war, of Queen and Country, of victory and conquest. Already there are reports of racist attacks and abuses which suggest how quickly this country could descend into fascism.

Then there are all those who have nothing to lose. Some of them might appear to be in the same group as the Bulldog Brexiteers, but as with all revolutions, the disenfranchised masses have been coopted by the false promises of political elites - in this case, Boris Johnson, Michael Gove and Nigel Farage. As James A. Baldwin said, 'The most dangerous creation of any society is the man with nothing to lose.' (Can anybody help me with a source for this?)


These are the children and grandchildren of two generations of people who, since the days of Margaret Thatcher, have increasingly been pushed to the margins of Britain PLC. They are betrayed by a failed education system, by the destruction of British industry and of the trade union movement, by the manipulation of the media, and by a neo-liberal ideology that has seen the gulf between Britain's richest and poorest widen into an abyss into which the country has now fallen.

The Bulldog Brexiteers and those with nothing to lose are not two distinct categories of voters, for the latter are easily seduced by the former. Disaffected, bored and marginalized young men are soft targets for radicalization - whether it be the radicalization of UKIP or the radicalization of IS. I say 'young men' deliberately, for this is an age of macho politics, and machismo is often a cover for insecurity, impotence and fear.

We are told that the referendum showed a generational divide: young people voted  to stay in, the over 65s voted to leave. This feels like a triple betrayal of the young by an older generation: we grew rich on the pickings of a housing market that excludes our children from home ownership; we benefited from free university education and are making our children pay through the nose for theirs, and now we have voted to make them captive little islanders cut off from any sense of belonging within the cultures and freedoms as well as the economic benefits of the European Union.

In fact, closer analysis reveals that economic and social factors were the crucial influences in voting trends. It was people in the poorest regions in terms of education, home ownership and employment who voted to leave. People in areas of low immigration were more likely to vote to leave than those accustomed to living in more cosmopolitan communities in areas of high immigration. Northerners and people in Wales voted to leave. (Why did nobody tell them how dependent Britain's poorer regions are on EU development funding?) Voters in the wealthy metropolitan cities of London and Bristol voted to remain. Scotland and Northern Ireland have their own powerful reasons for voting to remain.

The following images come from an article in The Times which is behind a paywall: 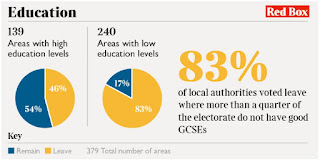 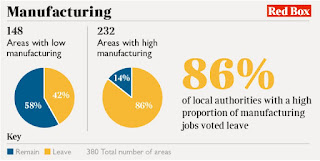 What about the generational divide? Young, middle class voters suffer the effects of the avarice and self-serving individualism of many in their parents' generation, including the current opinion formers in politics and the media, but many of them have parents who compensate for the shortcomings in the system by subsidizing their education and housing, by paying for them to travel and appreciate all the benefits of belonging within Europe and the wider world. They voted to remain, but so did their parents. That is not how the world looks for a youngster who grew up in the midst of social and economic disintegration, in a household experiencing generations of unemployment and the break up of traditional communities and families, far from the indifferent gaze of Theresa May in her kitten shoes, David Cameron and George Osborne in their DJs, and Tony Blair the botoxed billionaire. Many of these younger people also voted to leave, but the high turn-out of 72.2 percent still means that nearly 13 million people did not vote in this most life-changing of all elections. How could so many people neither know nor care what it might mean for them and their children?

Enter Jeremy Corbyn. He too represents a certain kind of political masculinity, formed by the values of the working class Left before the rise of gender politics. He is rightly criticized for his failure to include any significant numbers of women in his shadow cabinet, but there are  enough educated and dedicated women able to step into the breach and fill the gender gap. Murdered MP Jo Cox was not unique. She was one of a younger generation whose educational and economic privileges fed high ideals and noble visions expressed in a life of social and political service. There are many - perhaps a whole generation - like her. Corbyn can and must build a new political class by channeling the energies of such people.

Many of Corbyn's fellow MPs are staging a coup. Some of these, like Hilary Benn, are the career politicians of the Blair era. They have had the knife in his back ever since he won the leadership of the party through the support of ordinary party members, and they have been well-served by the supposedly left of centre media, notably The Guardian. Most prominent Labour MPs do not represent the people whom the Party has traditionally served. They too are employees of Britain PLC, and they helped to create the climate that made Brexit possible. They are trying to oust Corbyn because he failed to rally the party behind the remain campaign, but that is why I think he is the greatest hope for a reformed politics and a renewed society.

Unlike Michael Gove and Boris Johnson, Corbyn is not into political grandstanding, nor has he ever been part of the political status quo. He was a reluctant and late supporter of the remain campaign, and it showed - though this excellent Economist blog gives a considered analysis of the reasons for his conversion to the cause.  Since 1983, he has pursued the life of a dedicated representative of the people of Islington North who voted for him as their MP. He is loved in his constituency, and is known for putting his duty to the people he represents above the strutting and posturing of the Whitehall selfies. He is a man of decency and integrity, whose socialist vision has remained untarnished and unseduced by the careerism and corporatism of modern politics. If Corbyn was reluctant about the remain campaign, it was because he recognized the dark side of the EU - the unaccountable corporations and bureaucracies that now hold every modern democracy to ransom. Even those of us who are ardent Europeans acknowledge that this is a Union that is very far from functioning as it should. Now that a small majority of British people have voted to leave that Union, we are standing on a crumbling cliff edge, peering into the abyss. The options seem very limited. Corbyn may well be the only politician of any stature who has the credibility and the integrity to appeal to the disenfranchised masses who voted to leave, but to steer the country away from the brink.

Parliament does not have to act on the Referendum. It can reject the vote, and opt instead to work for a better, fairer European Union from within. That would be my first choice, but I fear that would leave a fatally weakened political elite in charge, this time without a mandate, in a way which would only fuel the resentment, alienation and frustration that gave the leave campaign the leading edge. Alternatively, the government could trigger Article 50 and begin the process of leaving Europe. The consequence will be a period of economic meltdown and political disarray, with potentially horrifying consequences not just for Britain but for Europe and the world. Both World Wars started in Europe, and the EU was created as a way of collectively saying "never again". It has secured the longest period of peace this recently invented and now disintegrating imaginary construct of a continent has ever known. Corbyn could I believe credibly lead a party that might unite the nation with a manifesto to remain in the EU but with a mandate for radical change.

We have glimpsed the alternative, and the world is in shock. It is not in anybody's interests for Britain to leave the EU, but nor is it in anybody's interests for Parliament to override the results of the referendum. So let the country go to the polls, and let Corbyn channel his lack of enthusiasm for the EU as it stands into a new politics of European unity. Let him work with a cross-party coalition of wise and trusted politicians to put together a truth-telling manifesto formulated around a new vision of Britain's membership of the EU, and of what the EU could be if it were a union formed around a vision of social justice, subsidiarity and solidarity. He has shown that he is a politician who listens to and represents many ordinary people far from the self-serving elites in Whitehall. That is the kind of leader we need. Of course it's a risk, but we face nothing but risk. We must measure the risks, but we must also act.

There is much talk of young people wanting to remain in Europe. I end with an invitation to read my son Dylan's passionate and eloquent blog - now an elegy - about why his generation should vote to remain.
Posted by Tina Beattie at 12:29 pm 1 comment: