Time for a women's reformation? 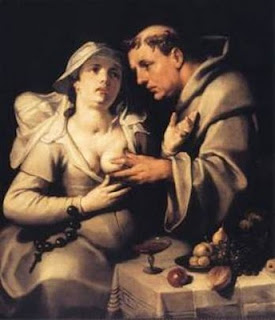 (When I first posted this, I described it as 'an extravagant polemical gush'. Several readers have persuaded me that I shouldn't be so apologetic, so I've deleted that description!)

With some admirable exceptions, the Catholic Church's leaders today are made up largely of authoritarians on the one hand and cowards and conformists on the other, and this has in no small measure contributed to the ongoing scandal of the sex abuse crisis. Cover-ups have been possible because the politics of the Vatican have been manipulated by a corrupted and collusive clique which has flourished in a culture of secrecy and  unaccountability. (See, for example, Robert Mickens' article in this week's Tablet.) This has resulted in a culture of bullying and fear, in which the most aggressive conservatives seek to tyrannise those who dare to question the church's current position on important issues, particularly around issues of sexuality, the role of women, and the form of the liturgy.

Few bishops seem willing to speak up in defence of the silent and increasingly alienated majority. Marginalised and remote from the corridors of power, they too may feel alienated and silenced - but if they can't take a stand, who can? While Mass attendance plummets, those who leave are unacknowledged and unmourned, so that the Church risks becoming a small, self-referential clique of those who smugly congratulate themselves for staying, and the failure of bishops and priests to challenge that attitude makes them part of the problem. That's why Hans Kung's open letter to the bishops, published last week in several languages, is like a hand grenade tossed into the crisis. He is scathing about the leadership of his former friend and erstwhile persecutor, Pope Benedict XVI, and he calls upon the bishops to take a stand on a wide range of contested issues in defiance of the Vatican.

In my recent article publised on Open Democracy, I pointed out how much more zealous the church's leaders have been in hunting down dissenting theologians than sex abusers. Even today, in the midst of the worst crisis in modern history, women's religious orders in America are undergoing a process of enquiry by Rome to weed out feminists and secularists. Where are our leaders who would stand up and defend us? Where are the voices of those who might speak out in favour of a healthy theological and ethical climate of debate and freedom of speech? Do our bishops and priests really have so little confidence in the truth of the faith they proclaim, that they think they have to protect it by colluding with Rome's regimes of silencing and control?

The last time corruption on this scale became such an issue in the Church, it resulted in the Reformation. But still, throughout all these transformations and changes, Christianity was and is a religion made for and by men. Of course women have played a role, sometimes a significant role, in influencing its development, but in its doctrines, structures of leadership and practices of faith, it is a religion designed to meet men's expectations on earth as in heaven, and to satisfy their spiritual and intellectual desires. Thus we have a God made in the image of man, a religious elite which, whether in strident evangelicalism or corrupted Catholicism, still asserts its narrow-minded control over human desire and sexuality, and a religious ethos which causes people to expend far more energy on abortion, feminism and homosexuality than on war, poverty and the structural violence upon which neo-liberal capitalism depends. Meanwhile, like volcanic dust gathering in the stratosphere, the growing disillusionment of women forms an invisible miasma which might yet ground our ecclesiastical high fliers. Most of the time, when one mentions the discontentment of women to priests and male theologians, the response is blank incomprehension or denial. Feminists are dismissed as an anachronistic little clique of leftovers from the 1970s, who ought to shut up or get out. They don't hear the truth, because they don't ask and they don't listen.

It's time for a women's reformation, and we'll bring that about not by leaving (they ignore us if we leave, and the church is ours as much as it is theirs), but by staying in and speaking out. For the last forty years, women biblical scholars and theologians have built up a vast body of scholarship which is still largely ignored by those in power. Week after week, Christian priests and ministers bumble on with their lacklustre homilies and sermons, oblivious and indifferent to the energy, zest and dynamism of so many theological voices which challenge and renew our readings of the Bible and Christian doctrine: women, postcolonial Christians, gay and lesbian theologians, environmentalists, pacifists - academic theology is teeming as never before with voices of difference and  newness of vision. But, when theologians do puncture public consciousness on a significant scale, it's weary old conservatism in radical orthodoxy guise that tends to get a hearing - Phillip Blond as religious advisor to the Tories, John Milbank as darling of the Vatican. Give us a break!

It might seem an odd time to experience a profound sense of hope, and yet that is what I feel. At last, cracks are appearing in the monolith. The bishops of England and Wales were quick to distance themselves from the suggestion by a senior member of the Vatican that the present crisis is attributable to homosexuality.

The shabby and shameful regime in Rome has lost its credibility and its authority. The Catholic Church is an astonishing historical, cultural and spiritual phenomenon - woven into the human story as no other religion or creed ever has been, extending across the globe and encompassing some of the greatest as well as the worst of human aspirations in our yearning and quest for God. Let's reclaim the church while the grip of these men is temporarily weakened. We need to speak out and keep speaking out, not in the name of an aggressive and hostile power struggle, but in order to ensure that the tyrannical minority is never again able to control the hearts and minds - not to mention the bodies - of the people of Christ.

The Catholic Church and the Sex Abuse Scandal

I have written an article on the sex abuse scandal which has been published in the online journal, Open Democracy: 'The Catholic Church's Scandal: Modern Crisis, Ancient Roots'
Posted by Tina Beattie at 11:24 am No comments:

A poem for Good Friday

"Our winter is the hiddenness of Christ" (Saint Augustine)
I step outside and feel the breath of rising song,
the spawning pond and budding trees
and ripening promises.
The rising sap dispels the chill of winter gloom
and make my dead bones dance
to springtime's tune.
Each day this week I've woken huddled underneath
the blanket of the season
and its wrong,
the heavy load of morning
weighing me down,
my spirit drained beneath
my penitential gaze
inhabiting a frozen world where prayer
is shrivelled
cold as death
and faithfulness
betrayed,
promised penances
unmade
and all the good intentions
gone
so that unholy,
unprepared,
I come again
to Calvary.
And yet,
sweet grace,
today the seasons break the rules,
yellow springtime giggles at this sombreness,
anarchic nature rises up
defiant in the face of death,
and crazy jubilation steals my mourning
with a kiss.
So here, beneath the laughing sun,
I spread my soul
and breathe my fickle promises of love,
scattered seeds of springtime hope
that drift and blow
and maybe find a space to grow
within my winter world.
Tina Beattie.
Posted by Tina Beattie at 2:29 pm 1 comment: