Driving through London's Hammersmith this morning, I was confronted by a vast advertisement for Gucci on the side of an office block. It showed the eyes of a woman in a burqa gazing down on the Sunday morning traffic. When I looked more closely, I saw that it was an advertisement for the 2013 'Trust Women' Conference in London. The message seemed to be that 'Trust Women' (or maybe Gucci) aims to liberate women from the oppression of the burqa - metaphorical or real - by inviting an inspirational range of high-powered speakers to celebrate women's achievements and challenge the causes of their oppression. Using more radical methods, Femen seems to share a similar agenda. 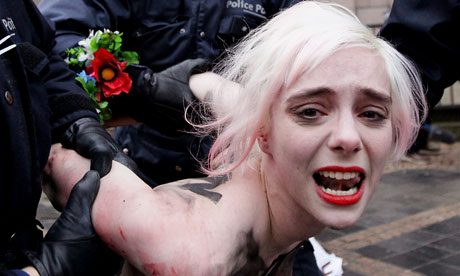 This morning's Observer newspaper carries extensive coverage of the activities of Femen, the sensational(ist) feminist movement which (maybe) was started by Ukrainian students in 2008, and has since moved its headquarters to Paris to escape persecution. One of the founding members, Alexandra Shevchenko, is in Britain to promote a new documentary about the group, Ukraine is not a Brothel. She appears on the front page of the newspaper, shown naked from the shoulders up, pouting seductively with a garland of flowers in her hair and slogans painted on her body. The full story is, quite appropriately, on p. 3 of the newspaper, where another beautiful, semi-naked blonde 'feminist' bares her teeth as policemen in leather gloves drag her away. The headline is 'Feminist, fearless ... and topless: activists gear up to bring "sextremism" to the UK'. Not much critical commentary from The Observer then. 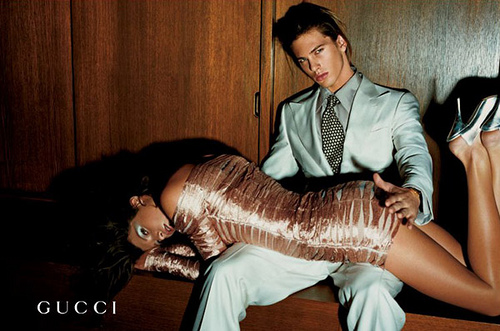 These juxtaposed images from the newspaper and the advertising hoarding set me thinking, and I decided to do a little googling when I got home. I was  struck by how Femen's publicity stunts and Gucci's advertisements result in  similar representations of the female body - scantily clad and beautiful, defined by sexuality, and with disturbing connotations of sado-masochism. In the case of Gucci's classy advertising campaigns, this is hinted at in the most sensual and aesthetic way, so that it seems to belong in a different world than the kind of violence meted out by police to Femen women. That, of course, is one of the points Femen's activists are making - that the female body is commodified and exploited by patriarchy everywhere.  But when does a political message become so identified with the oppressive stereotypes it seeks to challenge, that in the end it simply serves to reinforce those stereotypes? Shift the focus slightly, and a similar question could be posed to 'Trust Women'.

'Trust Women' advertises itself under the patronage of Thomson Reuters Foundation and the International New York Times. Its agenda includes tackling issues such as slavery and human trafficking, violence against women, and women's access to healthcare. The  advisory Board is made up of international public figures of impeccable credentials, and I am not casting doubt on their integrity nor on the potential impact of this kind of enterprise. Neither am I denying that corporate sponsorship is  an effective way of raising funds for worthy projects. However, there surely has to be some sense of coherence between an organisation's corporate sponsors and its ethos and aims?

'Trust Women' has two other sponsors - The European Bank for Reconstruction and Development, and a global American law firm called White and Case - but Gucci is prominently displayed as the headline sponsor in all the advertising. The 'Trust Women' website invites sponsors for its annual conference, saying that it is 'the perfect platform for companies wishing to reach a highly-influential audience of leaders from the world of philanthropy, civil society, government and law firms', and it promises 'worldwide exposure' to sponsors who will be able to 'align with the prestigious brands of the International New York Times and Thomson Reuters Foundation' to 'reach a truly global audience through promotional activities'.  Click on the Gucci link and you will arrive at the Gucci website offering 'laid-back luxury', 'high gloss glamour' and 'understated sophistication'.

Gucci is a corporation that exists for the sole purpose of selling luxury goods to very rich people. Reuters is an international news organisation that mediates much of the news we read in our daily papers, and the New York Times is an influential arbiter of American public opinion in its more informed varieties. When this kind of corporate sponsorship becomes entangled with the promise of global media coverage through high-profile news agencies on the one hand, and the promotion of developmental projects on the other, warning bells should sound. If you want to know what Gucci is about, don't look at hoardings advertising worthy causes with Gucci's name beneath an image of a woman in a burqa. Look instead at the commodified and eroticised women in the Gucci advertisements. That's how Gucci brands itself by branding women.

Advertising intrudes upon our lives in countless ways to trivialise our values and distort our perceptions. It shapes public awareness, values and aspirations through the manipulation of images and the commodification of desire. And corporations that spend vast resources on advertising, product placement and 'branding' are not going to offer sponsorship to any organisation that challenges what they stand for. 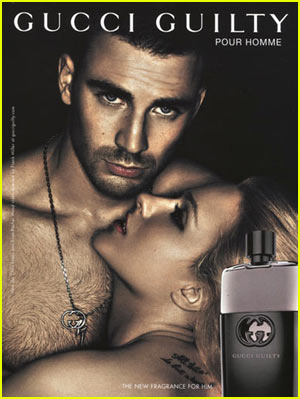 Human trafficking, slavery, the exploitation and abuse of women, lack of access to reproductive healthcare, high rates of maternal and infant mortality in the world's poorest countries, these are scandalous injustices that must be tackled by the international community. But it is no less scandalous that there is a growing global elite amassing obscene amounts of wealth to spend on luxury goods, from yachts and penthouses to Gucci handbags, as the gap between the world's richest and the world's poorest grows ever wider. Surely, 'Trust Women' can find a more credible corporate sponsor.

One might  argue that 'money, tainted as it is' (Luke 16), should be used to do good. I would need some persuasion to believe that this makes Gucci an appropriate sponsor for 'Trust Women', but perhaps there is an argument to be made. However, in the case of Femen, the question of funding and sponsorship is much murkier and more problematic.

I recommend Adrienne Joy's  analysis - 'Why Femen should probably just stop. Now.' A new documentary film, Ukraine is Not a Brothel, reveals that  Femen has for some time been promoted and controlled by a mastermind called Viktor Svyatskiy, although Femen has dissociated itself from him since the film was released. Svyatskiy's public profile and his misogynist attitudes have led some to suggest that Femen is a front in which a feminist cause masks just another venture aimed at exploiting the bodies of attractive young women whose gullibility makes them easy targets. Whether or not that is true, a quick internet search reveals worrying questions about an organisation whose methods leave little to the imagination, but whose motives and sources of funding are more difficult to see through. As Persephone Magazine wrote in a blog about Femen ('Femen-Ism') in 2012:


The real problem is that nobody knows from where they get their funding. The average salary in Ukraine is $319/month, but these women, who are otherwise out of work, have enough money to live in the expensive city of Kyiv and to travel all over the world. It is also quite difficult and expensive to obtain a visa from Ukraine to other countries (especially for young women, and for the unemployed), but the women of FEMEN have visas dripping out of their passports. They are being backed by a person or an organization with money and influence, and they aren’t saying who that is.

Which makes the performance aspect take a chilling note. This is a group to protest the fact that women in Ukraine are commodified and sold to foreigners; meanwhile, the FEMEN women themselves have apparently been purchased for their looks and their willingness to bare their chests, and shipped all over the world to perform what can easily be interpreted as a sex act. Oy.

Femen have indulged in some courageous and/or dangerously foolhardy antics in order to attract the attention of the world's press, and they have succeeded. But they are waging a war of ignorance against the forces of ignorance, and that ways lies barbarism. The fact that religion is a key target of their crusade on behalf of women is likely to alienate them from many religious feminists who might otherwise regard them as allies in the struggle against patriarchy. For example, Amina Sboui is a young Tunisian feminist who was briefly associated with Femen, posing topless with a slogan across her chest on Facebook, and being arrested for painting the word 'Femen' on a cemetery wall. After her release from prison, Sboui distanced herself from Femen because of their Islamophobia and the lack of transparency about their funding, although she remains committed to radical feminism. There are rumours that some of Femen's funding comes from Israeli sources, but it is impossible to verify any of these stories when there is so little transparency. 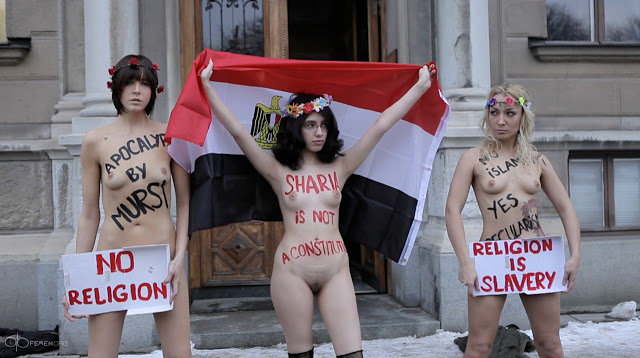 To bring informed criticism to the ways in which religious traditions oppress women is as important as any other aspect of feminist criticism. However, to launch an attack on religion per se, including the desecration and violation of religious places and objects which for women as well as men often have profound spiritual significance, is simply to perpetuate the worst characteristics of violence and intolerance that ethically concerned feminism should seek to eliminate. Beyond the sensationalism of the news headlines, women scholars, community workers and activists are working for change in every religion with far more success than is generally recognized, but our endeavours are not well-served when those claiming to be feminists indulge in the kind of extreme provocation that gives all feminists a bad name. Behind the scenes, religions may prove to be more hospitable and enduring contexts for the development of  ethically informed and socially engaged forms of feminism than the corrupted and commodified circus of the modern marketplace, with its corporate sponsors and its sleazy publicity stunts.

Dear women, cast your lot with Gucci or Femen if you want to, but they will never set you free. They are not in it for you.

Posted by Tina Beattie at 7:20 pm No comments:

Email ThisBlogThis!Share to TwitterShare to FacebookShare to Pinterest
Labels: Alexandra Shevchenko, Femen, Gucci, Trust Women, Ukraine is not a Brothel

The Holy See, the United Nations and Women's Rights

'Theology that hears the poor'

This is the text of an article by me published in this week's Tablet. Scroll down to see the published version, but as it's awkward to navigate I'm posting the text here as well.