Before you start, click here for a warm Christmas greeting.
Writing circular Christmas letters has always defeated me. I've never been able to work out what kind of news would be equally interesting and relevant for the wondrous diversity of people whom we've come to know through different stages of life and in many countries and contexts. So I have always given up, intending to write a personal note in every card, but usually just scrawling a signature at the last minute and posting the cards several days after the final posting date.


There's another reason for my sense of defeat. With some notable exceptions, many of the Christmas letters we've received over the years suggest we have an astonishingly fortunate range of distant acquaintances. We only know of them from the annual Christmas letter, but what super-humans most of them seem to be. Their annual holidays never disintegrate into package tour nightmares, family rows and teenage angst. Every holiday is the holiday of a lifetime and merits several paragraphs of detailed reminiscing. Not for them the rueful observation, 'We went on the holiday of a lifetime this year. Never again.' Their home improvements range from conservatories and bathrooms to fitted kitchens and extensions, garden ponds, greenhouses and new lounge curtains, and are equally and of course justifiably worthy of detailed description. In the course of growing up, their offspring have accumulated a vast array of certificates, trophies and accolades which have launched them on the path to stellar academic performances and brilliant careers, and along the way these gifted and amenable progeny have learned to play musical instruments with accomplished skill, have participated enthusiastically in said annual holidays, and have in due course married thoroughly suitable partners and produced a clutch of grandchildren. To achieve all this, and to write an annual Christmas letter as well, leaves me dumbstruck with awe and admiration.


But I've decided that a blog at least leaves you the option not to read it if you don't want to. I also thought that after thirty five years of marriage (thirty six if we count the illegal year, which my mother asked us not to do), it may be time for a bit of catching up. I'm pleased to say that the children have been potty-trained and educated after a fashion, are variously employed (some more gainfully than others), and have more or less vacated the family home. They have yet to recolonise it with hordes of grandchildren (although Daniel's girlfriend's cat has served that role quite well over the past couple of years), and I have not yet had to buy a pale blue wedding hat with a wide brim and a fetching satin flower on the side.


Still reading? If you're getting bored, click here. It's a short video clip about an old-fashioned typist which is highly amusing for those of us who are old enough to remember.


We have also, in the many years since I wrote a letter to anybody, refitted the kitchen several times, built a loft conversion, acquired a wide variety of garden sheds in all shapes and sizes, installed a garden pond and inherited a greenhouse in which Dave now happily potters with his tomatoes and seedlings, having retired this year (see below for more). We've been through several pairs of new lounge curtains, and done a fair bit of decorating. We've had numerous holidays, some more successful than others, and have recently bought a houseboat and a camper van, which is perhaps the western consumerist equivalent to the wandering asceticism of elderly Hindus.


Here is another diversion to keep you reading. It's a highly athletic version of Swan Lake by the China State Circus, and this four minute clip is a wonder to behold.


The slideshow accompanying this blog give a brief visual survey of the year, with a little chronological licence. Some of the photos were taken at a farewell party for Daniel in February, before he headed off to train as a safari guide in a game park on the edge of the Kruger in South Africa - hence the African theme. On 14th December, we're flying off to his graduation ceremony to enjoy a brief escape from snowy England, before returning to Bristol for Christmas.

(Anyone who has read this more than once will realize that it is in a continuous process of metamorphosis, as those mentioned herein eventually decided to read it and listed numerous sins of omission and commission which demanded immediate correction and penance. Having thus brought our family to the brink of disintegration and ruin through my blog, I must sadly revert to best wishes and signatures next year. In the meantime, we're off for our appointment with family mediation).


After spending most of his adult life in not quite continuous employment with Ove Arup and Partners, Dave retired in May to spend more time with his cabbages. I'm happy to say that so far they are proving more entertaining than an office full of engineers, and his allotment has become an all-engrossing pastime, with lots of soup to make and beans to freeze on rainy days. He is the not quite single occupant of Cranbrook Road most of the time, although Daniel's girlfriend Morven and her cat lodge with us, I go home at weekends, and our niece Shaina has discovered it's warmer than her student flat in Bristol and the food's better, so I think she's quietly staking her claim to the spare room.[This is uncensored, even although a feeble protest was made in defence of engineers].


I have swapped my studio flat in Putney for a houseboat on the River Thames in Twickenham where I stay during the week. Roehampton University is a short bus ride away or, when I'm feeling energetic, a cycle ride along the river and through Richmond deer park, but I'm discovering that feeding the ducks and gazing out of the window at the river is so much more fun than writing theology books and marking students' essays. However, given that Dave hasn't yet managed to feed us, pay the mortgage and fund the annual holidays, extensions and home improvements with the proceeds from the allotment, I hope to carry on being a wage-earning feminist theologian until cuts in the university funding system drive me to join him in the cabbage patch.


This cartoon tells you all you need to know about Dylan's transition to adulthood:

And here, in his own words, is what else he has been doing: 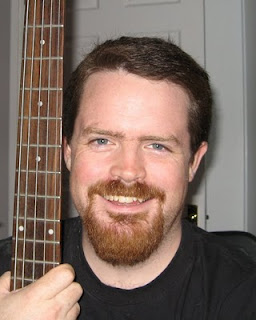 Dylan's still in London, building websites for actors and actresses. This year's adventures include skiing his first red run (by mistake!), scuba-diving with manta rays and reef sharks, playing bass in a pub blues jam, and giving talks on time travel, web stylesheets and the physics of the electric guitar. Right now he's juggling about thirty ideas and projects, from a zombie chorus rendition of the Battle Hymn of the Republic to a stop-motion animated short film about bass guitars to a remarkable new version of the London Underground map, and his new years' resolution will be the same as it has been for the last four years - to actually finish one of them.

My request for Joanna to provide a similar paragraph has met with a resounding silence, although her last family e-mail gives eloquent testimony to the extent to which she is suffering for her art:
(This section has been censored by Joanna. She said I could keep in the bit about the pumpkin, so let me resume at that point):

Musn't grumble though, it could be worse, I could be the poor pumpkin...
The pumpkin in question was lovingly grown by Dave only to spend a brief but (I hope) happy life as a Halloween mask before rolling under the settee and being forgotten about until slime began oozing across the floor and alerted us to its presence.

When not living a La Boheme existence, Jo has appeared in several plays in the London and Edinburgh fringe, most recently in a play called Burst in Edinburgh in August, which gave us an excuse to spend a few days sampling the city's thespian delights. This is the precursor to that future Christmas letter when I may modestly have to mention that my daughter has recently appeared in the West End and Broadway. Until then, as you can see, she swigs a glass or two of Prosecco with my sister, and tries to ignore her fraying clothes.


Daniel eventually provided a paragraph, although I think it was ghost-written by Dylan. I have lightly edited it to make it safe for Great Aunt Maud to read: 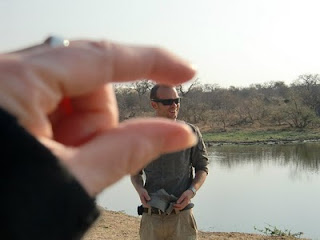 Dan has spent most of the last year learning to identify various kinds of animals from the noises and smells they make - areas in which he already has a wealth of experience after living with his brothers for so many years.
After passing all his noisy-smell exams, Dan is now working as a safari guide at Ezulwini, a lodge in South Africa. He wakes up each morning and goes driving in the bush with a s..t load of maps, a hangover and a group of loud Americans. When he's not leading Americans around the bush, he spends time "practising his Shangaan" and working incredibly hard to prepare for tomorrow's hangover.
(I should add, of course, that some of our best friends are American). 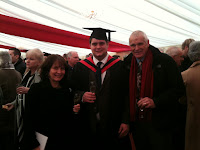 David graduated from his postgraduate degree in Law, is now in full-time gainful employment and pays his own rent (although not, for some reason, his mobile phone bill, which still mysteriously appears on my bank statement every month). He remains in a close relationship with Seren, who is a doctor from Wales. At the time of writing this would seem to be the closest we are to the blue hat and the grandchild, but I guess good mothers steer clear of such minefields of speculation. It wouldn't be the first time I'd furtively contemplated what one might wear on such an occasion. I think when the time comes I shall wear purple, with a red hat that doesn't go. (See Jenny Joseph's poem here). David too was asked for a contribution in his own words, but the lure of the pub on a Friday night was clearly more enticing. 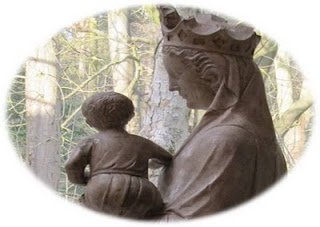 Our Christmas card image this year is a Madonna and Child sculpture in the Burrell Collection in Glasgow. We went there last year when the surrounding park was a snowy wonderland, and this mother and child spoke to me on many levels: the curiosity of the infant nudging away from his mother's breast, the tenderness of her gaze as she watches over him, and the long journey that lies ahead into those tangled forests of human life, where he will one day transform the dead wood into the tree of life.

MAY THE PEACE, HOPE AND JOY OF THIS FRAGILE AND WONDROUS WORLD BE WITH YOU AND THOSE WHOM YOU LOVE.
SEASON'S GREETINGS FROM THE BEATTIES