VIOLENCE AND VENGEANCE - HISTORY AND HYPOCRISY: "an eye for an eye will make the whole world blind" 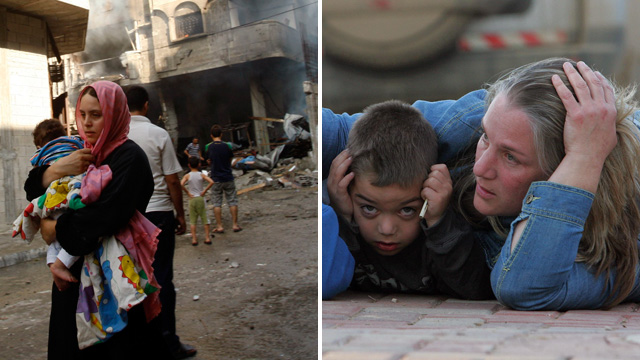 I have never publicly commented on the Palestinian Israeli catastrophe, though many people I know have strong opinions and do not hesitate to take sides, usually for the Palestinians, but sometimes for the State of Israel. One Facebook 'friend' has posted a sloganeering poster for the Israeli armed forces which has left me feeling sick at heart. When I listen to Israelis who passionately defend Israel and condemn the Palestinians and surrounding Arab nations, they sound disturbingly like the many South Africans I used to know who defended apartheid. The language and justifications are almost identical.

Nevertheless, we Europeans have forfeited our right to play judge and jury in any situation involving the Jewish people, even as we might feel profound revulsion at the disproportionate violence of Israel towards the Palestinians in retaliation for attacks by Hamas. Where was our moral outrage in the Holocaust, when nation after nation turned Jewish refugees away and sent them back to die? We should remember that the Second World War was not fought because Hitler had set out to eliminate the Jewish people, and Britain carpet-bombed Dresden but it never bombed the railway line to Auschwitz. Brave and necessary though that war was, it was not a war to protect the Jews. Britain’s all too recent history of anti-Semitism should make us wary of speaking out as if we are in no way implicated, as if that recent history has nothing to do with us. On the other side, supporting the Palestinians does nothing to take away the fact that the vast majority of British secular liberals are also deeply Islamophobic – even though most of them don’t know any Muslims.

Our moral judgements are highly selective, and our outrage against injustice is more vociferously targeted at others than at ourselves. It is easy to start a heated debate on the Israeli-Palestinian conflict because nearly everybody feels qualified to take a stance. Educated liberals are often more careful about nuance, context and complexity when discussing Britain’s wars in Iraq and Afghanistan, not to mention our government’s ongoing support for and sometimes participation in America’s illegal execution by drone warfare of vast numbers of people believed to be potential terrorists – and any innocent bystanders who happen to get in the way. Our moral high ground is really nothing but an empty soapbox.

This is not to deny that Israel is today waging war against the displaced people of Gaza because of the botched kidnapping and murder of three teenagers by two individuals apparently acting alone. Appalling though this was, it was murder, not terrorism nor an act of war. Uri Avnery’s story about the revenge killing of a Palestinian youth who was burned to death by a gang of Israelis makes awful reading. From a different perspective, David Grossman writes movingly of the despair that now drives this senseless war.

An eye for an eye? How many lives does it take to avenge a murder? How many deaths are necessary to cure the incurable wounds of bereavement, to fill the unfillable gap left by the loved ones who were killed? Here in New York I’m tempted to do a comparison. I haven’t yet been to the World Trade Centre memorial, though I intend to brave the reputedly daunting security procedures to make that sombre pilgrimage. Yet in retaliation for the murder of 3,000 Americans, America and its British allies unleashed such deadly violence that a whole region has been plunged into anarchy and war. It is impossible to calculate how many people have lost their lives so far in this ongoing spiral of vengeance. The British and Americans did not count how many they were killing in Iraq so we will never know for sure, and still the violence goes on. Compare that with the attempt to gather and identify every fragment of bone from the ruins of the Twin Towers. Israel has much to learn from its powerful American allies if it wants to justify killing hundreds or thousands of Palestinians for every Israeli death. A glance at the Wikipedia page for the ‘War on Terror’ includes a list that even George Orwell could not have invented. Under the chapter heading ‘Operation Enduring Freedom’, one finds the following:

You really couldn’t make this up – the second part of ‘Operation Enduring Freedom’ in the Philippines was called ‘Operation Smiles’.

I find myself asking how different recent history might have been if the Americans had treated those murderers of 9/11 as just that – technologically-competent thugs who should have been put on trial the way any other common criminal would have been put on trial, including those all-American citizens who regularly go on shooting sprees. Instead, the suicide pilots of 9/11 and their Al-Qaeda affiliates have been darkly glamorised, becoming icons and role models for thousands of disaffected Muslim youth as gradually the savagery of that September day has spread through the poisoned channels of American and British militarism pouring fuel on the already simmering passions of Middle Eastern politics. If the deaths of 3,000 Americans had to be avenged by so much senseless slaughter, how can we condemn the Israelis for doing the same? Of course America is Israel’s friend. They speak the same political language, and Britain, nostalgic for imperial power, can only lurk simpering and fawning and cheering on the bullies in the shadows of violence.

Weep for Israel. Weep for Palestine. Weep most for democracy’s shattered dreams and broken promises. Weep for a world blinded by vengeance.

Posted by Tina Beattie at 5:10 pm No comments: